You may of heard in the latest episode of The Engine Room Show that Cooper is getting involved in RevUp4DSI again this year to raise awareness and money for Down Syndrome Ireland.

And that there will be a Fun Pub Quiz in Coopers local pub to help raise some funs! MicksGarage.ie and The Engine Room will have a table at it! So how about you join us!

Quiz, music, fun & banter and it’s hosted by Cooper too!

RevUp4DSI takes place on May Bank holiday weekend. Its a mystery motorbike trip where we end up who knows but its a brilliant adventure seeing parts of Ireland that you never would ever dream of visiting! Small back roads, mountains, coastlines who knows!

On the trip Cooper will be riding the new BMW R1200 RT, very excited to get out and about on this with the new liquid cooled flat twin engine with 125bhp. 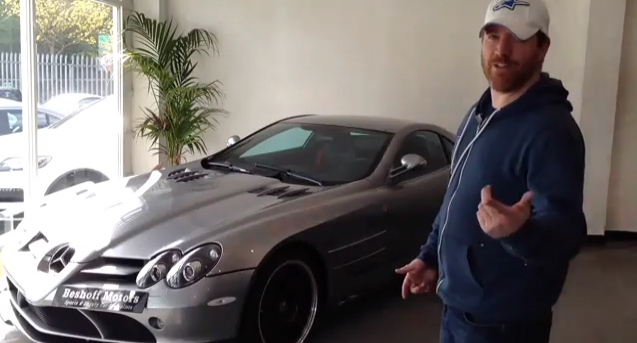 So, Dave Humphreys likes to swan around the world, driving all manner of swanky cars.

I just picked up my new ride from Jeremy and the lads at http://beshoffmotors.ie and, I think, it’s a little more impressive than anything I’ve seen him in to date.

Here’s a video of me collecting it. It being a Mercedes McLaren SLR 722:

We Will Amarok you!

I love Pick up trucks!

They are big powerful capable man thing that men want and need . .

The VW Amarok is a monster of a pick up truck  which is un-tractor like and more car feel with mad torque and an urge to do some manwork!

It’s a high ride the Amarok which gives you a comfortable view in traffic, and while its sitting in bumper to bumper congestion it humming away looking for the nearest puddle or muddy field to trundle through. I would love to try this with an automatic transmission because the transitions between 1st and 2nd in manual were not the smoothest, I don’t put this down to my clutch shift control, I think as its a work horse it’s like this pick up need to remind you “hey we’re in gear, let’s go”

As it is comfortable and very fun to drive, it is a commercial vehicle and will work hard for you and your needs. The Load bay is big and ready to take the weight and deliver. And inside had loads of space for your crew.

I was looking forward to taking the Amarok off road but due to me falling over and smashing my knee I couldn’t drive a manual transmission so I had to get it back to Volkswagen and get an automatic. But judging by it handling on a dodgy back country road with flooding it would do just fine and dandy!

I did get the Amarok back and picked up a VW Caddy 7 seater passenger .

Well if your into your out door stuff like biking surfing and need to take your crew with you, including luggage and gear The Caddy is your man! Ha i’d love to see the Caddy get a bit more height and 4×4 it would make an awesome SUV.

The room inside the Caddy was great, 2 back rows of seats, the 1st takes ISO fix for kids seats but not the back row, which if needed for more space you can just slide out! #handy

Loads of headspace and storage above the driver with a deep shelf, under floor storage behind and little nets along the roof.

There was also an awesome bike rack on the lift up back door! Which is something that i don’t get why do mpv’s have a lift up back door? Would  a double opening door not be more convenient?

The automatic transmission was so smooth, and an actual pleasure to drive, when i had to bring it back, I’m not kidding my daughter Elizabeth (4) cried she said she loved that van and wanted me to keep it!

I would recommend this as a family car and a recreational car too, with loads of space, fuel efficient, comfortable and has a cheeky stylish look to it!

Alan Kearns sent me this on Facebook this morning.

Love for the Bug

This is the VW Beetle that i was testing out!

It was the one of the most comfortable cars i’ve driven, i think the heated red leather seats might have added to the sensation of comfy!

It was a 1.4 TSI engine which gives loads of torque in low revs, which made this little bug a very fun car to drive! It was a real pleasure, luxury and cheeky at the same time! I’m sure that this car really love to be driven, especially in and out of muddy puddles.

The feel was great but obviously conscious that the last model was a very female styled car, even with a flower holder, this new model has been working out and has gained muscles but still contains that sexy style that comes with the beetle reputation.

A beautiful finish on the interior with a shiny black retro styled dash and the speaker surrounds have a light round them that you can change the colour to suit your mood Red, Blue, white or switch them off!

The media player is a sweet bit of kit it has an SD card smack bang in the front panel that you can play all your playlists off, or you can plug your ipod into the cable provided in the glove compartment!

One thing i couldn’t figure out was the phone, was there as bluetooth on it? I don’t know because for the life of me i couldn’t figure it out! And i was determined not to read the manual , so I was without a phone. (Stubborn as you can get)

I did however have to refer to the owners hand book though, after much searching and nearly pulling apart of the car, I had to go to the book to figure out how to open the petrol cap, I’m used to flicking that switch by your seat to open it, but no the beetle has to be touched, you just simple press the cap and it pops open! While I’m on the subject of petrol and filling up, I did have to make 2 pitstops during the week, just throwing a tenner in mind, but i thought that this car as much as i love it, it seems to like courtyards in petrol stations, maybe it’s like herbie and wants to show itself off under the glistening lights that show off its curves! But the 1.4 tsi didn’t suit my driving, long journeys, country roads and motorways! It seemed to be a bit to thirsty for me, saying that, in the City it was great, so that’s where the petrol engine will win over a Diesel.

There are Diesel engines available in the new Beetle even a TDi which i’ll have to check out!

It got snowed on too!

(bin in pic not an optional extra)

Which i then discovered that the window / door design lets rain and snow fall in when you open it!

Boot space! Well check this out, pleanty of boot space for 2 CDJs my over night bag and gig bag! I’d even get a Mixer and more in there! And the back seats fold down flat so yup a rig would fit in too! We did fit Dave H in it too CLICK HERE

I actually miss driving it, It’s one of those cars that you love the inside and out!